From Seaweed to Fish Feed, How Aquaculture Meets the Future
Innovative ideas spotlight the need to adapt practices to a changing climate—and feed a hungry world.
By April Fulton
PUBLISHED OCTOBER 5, 2016 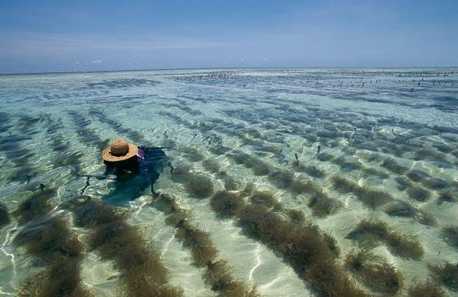 A farmer cultivates seaweed off the Indian Ocean island of Zanzibar.
PHOTOGRAPH BY MICHAEL S. LEWIS, NATIONAL GEOGRAPHIC CREATIVE
As we continue to deplete the ocean of wild fish in our never-ending quest to feed ourselves, we’ve turned to fish farming as a possible solution. But aquaculture hasn't always been the cleanest industry around. The Blue Economy Challenge, sponsored by Australian Aid, the World Wildlife Fund, and several others, aims to nurture new ideas in sustainable aquaculture development that help those already working in the industry improve their lives and make better products.
While seaweed may not sound sexy, global demand for it in food, cosmetics, medicine, and toothpaste has helped female seaweed farmers in Zanzibar earn a decent living for their families for decades.
Now that harvest is being threatened by warming waters, degrading the quality of the seaweed and threatening the livelihood of 10,000 or more of these farmers.
But one company has an idea that will help grow more seaweed and reinvigorate the ocean’s natural circulatory system using a series of polyethylene tubes that make it easier for the colder, denser, more nutritious water from the ocean’s depths to reach the surface and feed plants and fish.
“So what we’re doing is basically sticking a straw down into the deeper parts of the ocean—a couple hundred meters—and circulating some water up to the surface and feeding that into a seaweed farm,” says Joe Katz of the Climate Foundation, based in Woods Hole, Massachusetts.
The foundation was one of nine organizations that recently received a total of $2.3 million in awards for innovative ideas in aquaculture through the Blue Economy Challenge.
The Climate Foundation team, led by Brian von Herzen, has been working on ways to restore ocean upwelling using renewable energy for more than a decade. His wave-driven pumps upwelled nutrients and encouraged plankton growth during an experiment off the coast of Hawaii in 2008.
Here’s how it works:
With the addition of a marine permaculture platform that forms a structure for kelp to attach to, nutrients from the upwelling water will help grow plankton and kelp, which helps Zanzibar seaweed farmers grow more and healthier plants, encourages a new habitat for fish, and helps sequester carbon.
Another Blue Economy Challenge winner, MicroSynbiotiX Ltd., is developing an oral fish vaccine that could help prevent the massive loss experienced on an aquaculture farm due to bacterial and viral illness.
The company is developing a microalgal feed that would be a vehicle for a variety of vaccines, reducing the need for antibiotics later. The benefits? The microalgae is something juvenile fish and shrimp would normally eat. Current vaccines don’t work well because they're not a natural part of the fish diet and pass through as waste, explains Antonio Lamb, who's part of the team developing the new oral vaccine.
The other common practice to prevent farmed fish from getting sick—injection vaccines—are very labor intensive, Lamb says. “You literally have to scoop [the fish] out of the water, vaccinate it, and put it back.” That can lead to more fish death and damage.
But some people do have concerns about the engineered product, Lamb acknowledges. To mitigate potential risk, he says the microalgal feed is freeze-dried, so it’s not alive and won’t reproduce in the wild. Also, the algae will be a freshwater type that wouldn't survive in the ocean on its own.
The technology will be tested with farmers who work in aquaculture in east Indian Ocean countries.
Other innovation challenge winners run the gamut, from low-cost solar salinity sensors for shrimp ponds to a new source of protein to feed farmed fish on fly larvae reared on biowaste.
Once the spotlights go down on the winners, though, the efforts to move the ideas forward won’t end. Carrie Freeman, a long-time information and communications technology expert and a partner at the strategic consulting group SecondMuse, which helped launch the program, says the innovators will participate in a seven-month incubator program to help them bring their ideas to the next stage—and eventually to market.
“We’re not the aquaculture experts. But we’re creating the environment for these people to share ideas, share networks,” Freeman says.

The initial funding is coming from the Australian Department of Foreign Affairs and Trade, but “the hope is that we’re able to attract and secure private-sector funding” going forward, she says.