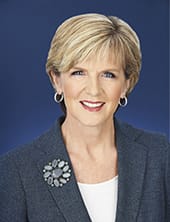 Minister Susi Pudjiastuti congratulations on being “The Fireball” and for your award which is so thoroughly deserved.

I also want to acknowledge a former minister from the Australian Government, Robert Hill, who is here today – former Environment Minister and also our UN Representative.

Thank you all for being here today for what I believe is an exciting announcement.  I particularly want to thank you Carter for your warm introduction and for WWF’s great support for this initiative under your leadership.

Oceans are essential to human life.

They provide food security and incomes for millions of people – they are the highways of global trade, and they are a source of joy, inspiration and pleasure.

As human populations have boomed, we’ve stretched the capacity of our oceans to absorb the impact of our activities.
Relieving this pressure on our oceans is crucial to their health, and to ours.

Technology has opened new potential for human interaction with the oceans – to make longer sea journeys, operate at greater depths and make further and better use of undersea resources.

However, we need to act sustainably. We need to ensure our maritime industries – both traditional industries like fishing and shipping and more modern pursuits such as tourism and renewable energy production – are working in harmony with the oceans.

The ‘Blue Economy’ represents an opportunity to realise the great economic potential of the oceans as well as ensuring their long term sustainability.

To strike this balance we must be smarter about how we use our oceans.

According to the United Nations, the livelihoods of over three billion people depend on marine and coastal biodiversity.
It is concerning, deeply concerning, that 30 per cent of the world’s fish stocks are currently fished well beyond their sustainable yield points.

With oceans already under pressure, we must look to emerging technologies to help us find the balance in the Blue Economy.
The world’s population is forecast to reach 9 billion people by 2050 and there must be new ways, innovative ways, to meet the growing demand for high protein food.

When we succeed – and we will - there will be great economic potential.

WWF recently estimated that global ocean assets were worth in excess of $24 trillion US dollars.

If taken as a country, the oceans would be the seventh largest economy on the planet.

Happily, the global community has committed to healthy oceans, including the commitment to “life below water” – goal 14 of the UN Sustainable Development Agenda.

In Australia the ocean is central to our national identity.

Around 85 per cent of our population lives within 50 kilometres of the coast, and our exclusive economic zone is the third largest in the world.

We have the world’s largest network of marine protected areas around 3.2 million square kilometres. We have stewardship of one of the great marine treasures on the planet – the Great Barrier Reef – a responsibility we take very seriously.

Last year, the World Heritage Committee concluded that our management of the Reef is world’s best practice – building on over 40 years of diligent management.

Aware of the pressure on our oceans, I made the Blue Economy a central platform when I chaired the Indian Ocean Rim Association (IORA) in 2014/15 – this is a group of 21 member nations – from Iran through to Indonesia and all of the countries in between.

Around a third of the world’s population lives on or near the Indian Ocean, and much of the population growth that we expect to see in the coming decades will occur in this region.

In aquaculture, for example, we see a paradox where efforts to reduce pressure on wild fish stocks has an unintended consequences.

Around sixty per cent of global fish stocks come from aquaculture operations.

Yet, at the same time, a third of the global fish catch is being used as feed for these farms.

To help these kinds of problems, in a way that maintains ocean sustainability and also generates better incomes for aquaculture farmers, I tasked our innovation hub - this is set up within the Department of Foreign Affairs and Trade and we call it the innovationXchange – to find solutions.

The innovationXchange has partnered with WWF with Conservation X Labs and with Australia’s own premier national science agency CSIRO to engage private sector supply chains, innovators and scientists from around the world.

This group of experts agreed there was great scope for innovation to both increase the production of farmed fish and simultaneously reduce the pressure on wild caught fish.

Our innovationXchange and our experts developed a Global Challenge question:

How can we rethink aquaculture to ensure both sustainable development and environmental sustainability?

The Australian Government committed $3 million to pilot new or scale up existing projects proposed by the winners of the Aquaculture challenge.

The response has been overwhelming – 221 applicants from 41 countries came up with suggestions and innovative ideas to answer our challenge – university groups, start-ups and well established industry players have come to us with their best thinking – and I’ve been really impressed by the quality and breadth of the ideas.

Our expert panel shortlisted 20, all of which showed real potential. From these, we narrowed it down to nine winners – although there is one more project under evaluation – so I’m hoping for ten.

They come from the United States, from South Africa, France, Thailand, Tanzania, India and the like.  Some of which are actually going to include examining the alternative feed sources for aquaculture, so these issues will be at the fore.

These have been selected on the basis of their potential to transform aquaculture globally and we are also focusing on significantly improving the economic and development benefits for communities in the Indian Ocean region.

Allow me to highlight just two of the winners – they were all fabulous – but just two of them for the purposes of my speech today.  You will be able to find further information on our other winners on the innovationXchange’s web page.

MicroSynbiotiX - a team of biotech gurus, led by Antonio Lamb – have come up with a very clever way of ensuring the health of fish in aquaculture operations.

This will overcome one of the great challenges of aquaculture – how to reduce the losses due to disease, which can spread so quickly through an intensive farming operation by using tiny algae to vaccinate fish.

We think the project has significant commercial application, and will transform the way aquaculture farms operate.

Secondly, the team at The Climate Foundation, represented here today by Dr Joe Katz, is addressing the fact that in many parts of the world change in climate has prevented natural ocean upwelling.  The process which brings nutrient rich waters to the sea surface and boosts aquatic plant and animal productivity.  Without this naturally occurring process kelp forests and seaweed farms are suffering and dying.

The Climate Foundation has developed a multi-faceted marine permaculture system to reverse this process.  Pumps placed at the ocean floor powered by wave energy restore upwelling in areas where the natural process has haltered.

Now that’s my version of how it happens but it’s apparently a lot more complex.

Nevertheless, we are really pleased to be working with The Climate Foundation to take this technology forward.

Each of these initiatives will be fast tracked with seed funding, mentoring and incubation support.

I’m also very pleased that WWF will support some of the other innovators involved in this challenge through their brand new Oceans X Labs initiative.

Australia’s commitment to the Blue Economy is enduring and I’m so delighted to hear from Minister Susi, Minister for Marine Affairs and Fisheries Minister from Indonesia, and the current chair of The Indian Ocean Rim Association.

Susi – you obviously share our vision, our passion for success in the region, and I am really looking forward to continuing our work with you - Australia and Indonesia  - during your chairmanship.

Australia also places great emphasis on helping our neighbours in the Pacific and address the challenges that they face. We are bound by the Indian Ocean and the Pacific Ocean and of course the Great Southern.

An estimated 75 per cent of Pacific coastal fisheries will not meet food security needs by 2030.

So we are going to bring our ideas and support to the Pacific to meet this challenge and I’ll be progressing later today with announcement as one of the Ocean Champions at Secretary Kerry’s ‘Our Oceans’ Conference.

So ladies and gentlemen, I am inspired by the energy and the diversity of leaders from across government and business and the science world and academia joining in the efforts to realise the challenges and opportunities of the Blue Economy.

And I congratulate the winners of our Blue Economy aquaculture challenge and look forward to working with you.