The Problem: Food Insecurity in a Changing Climate​

​When talk turns to how we are damaging the planet, the phrase “carbon footprint” is often heard. These conversations tend to be depressing, negative and hardly inspirational.  At the Climate Foundation, we have been working on a positive, motivational approach. So instead of talking about “carbon footprints” we develop “carbon handprints”—in other words, innovations that can help the planet.  The goal is to make our carbon handprints bigger than our carbon footprints.  We see this approach as critical to building the energy and momentum needed to chart our way to a sustainable future. One example of this work is the Climate Foundation’s efforts in the oceans.

The global fish catch has dropped 23% per person in the past 25 years. This drop in productivity comes at a time when fishermen are exerting more effort than ever to catch fish.  In developing regions like China fishing effort is up a staggering 2500% over the last two decades.  What’s more, over four fifths of the world’s fisheries are either considered fully exploited, with no room for safely increasing the catch, or they are already overfished and in need of rebuilding.

To understand one of the reasons for this decline in catch, we have to move down the aquatic food chain. The ocean’s primary productivity is the rate that plants convert carbon into organic material through the process of photosynthesis. Globally, this rate is on the decline, by some estimates as much as 40% since the 1950’s.

Much of this decline in productivity is thought to be caused by the warming of the oceans.  Over 90% of global warming today occurs in the world’s oceans in the form of a thickening layer of warm water near the surface.   This layer creates an unnatural  barrier to the upwelling of nutrients vital for plankton growth.  In turn, plankton is a critical food source for many fish.​ 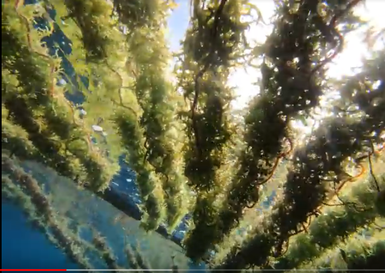 If we could restore the natural level of upwelling, we could restore primary production in the oceans and help restore ocean fisheries.  And there might be an additional benefit to this effort. Phytoplankton take in CO2 in the same way that land-based plants do. So increased phytoplankton production could lead to a surge in the sequestration of this greenhouse gas—think “carbon handprint.”

Vegetarian fish are considered to be among the healthiest proteins, and the potential demand for this food source is huge. How can we restore global fisheries, while at the same time provide enough fish to help feed the world and measure the resulting carbon sequestration?  Over the past decade the Climate Foundation, led by Dr. Brian von Herzen, has been working to develop ways to restore ocean upwelling using renewable energy.  In 2008, Dr. von Herzen was featured in a Discovery Channel documentary on restoring ocean productivity. Working with two preeminent plankton experts, Dr. von Herzen demonstrated the use of wave-driven pumps to upwell nutrients and grow plankton in a portion of the Pacific Ocean 100 kilometers north of Hawaii.  In just 57 hours after deployment, the system sparked plankton growth. Shortly thereafter, these blooms attracted various species of fish. Two weeks later, a 17-foot long whale shark was still circling the area feeding on  plankton that had started blooming.

Building on that success, the Climate Foundation team has developed larger “marine permaculture” systems (patent pending).  These floating platforms use wave energy to restore nutrient upwelling to pre- global warming levels.  While the nutrients encourage plankton and kelp growth, the platform provides a structure onto which kelp will attach. In essence, this forms a mini-ecosystem.  The kelp forest will provide habitat for forage fish, who will feed off  the replenished plankton.  Game fish will, in turn, eat these forage fish, and on up the food chain to tuna and sharks.  What was once an aquatic desert will thrive with life.
​
These platforms will be placed at a depth of 25 meters, making them safe for navigation.  They can be traversed by the largest ocean-going vessels without harm to either the vessel or the structure.  This depth placement also ensures that these platforms will be able to withstand adverse weather conditions, including even the most severe hurricane.   After an initial maintenance period, the marine permaculture platform is designed to operate  without human intervention for up to three years at a time.

Over the past five years, the Climate Foundation has been conducting research with the Woods Hole Oceanographic Institution regarding the use of mesoscale cyclones that are 2 km (1.2 mi) to 50 km (6.2 mi) in diameter to navigate marine permaculture platforms.  For example, at any given time there are hundreds of mesoscale cyclones circulating in the Pacific Ocean, some of which may last for months. We envision dozens of platforms riding these mesoscale cyclones, in much the same way that some birds ride thermal waves, providing a food delivery service in areas that would otherwise comprise an aquatic desert.

​Marine Permaculture Phase 2:
We were chosen out of a field of 220 organizations by Australia’s Dept of Foreign Affairs and the Blue Economy Challenge to deploy a Marine Permaculture array in the Indian Ocean to validate the technical benefits. In this phase, we demonstrated the biological response of commercially relevant macroalgae to deep water upwelled to the surface. 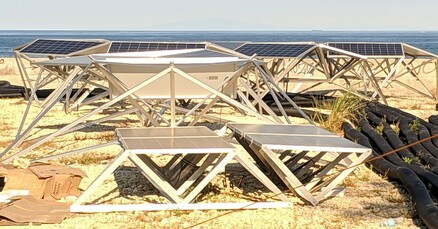 Collaboration with local partners will enable the Climate Foundation to reach the communities that are (a) in need of technology and seedling supply chains to increase production of cottonii, (b)  and highly dependent upon seaweed farming for their livelihoods, (c) value chain creation development of liquid extract supply and (d) in need to transform to eco friendly farming methods. Thousands of farmers’ livelihoods are under threat due to climate change reducing yields. Marine Permaculture irrigation of existing seaweed farms has the potential to restore and drive seaweed growth quickly, which will accelerate ecosystem service regeneration and provide an early revenue stream for community members who harvest and sell seaweed.

We also expect that these platforms to potentially comprise ecotourism destinations, considering the abundant and diverse sea life that will be found near them.   This opens up the possibility of an additional funding model for platform building, deployment, and maintenance.

Efforts like marine permaculture mitigate global warming while restoring ecosystems and ensuring food security for billions of people through this century.  Please join us in making  ecosystem “handprints” that can help us realize a more sustainable world while feeding burgeoning populations.

Photo "Sardines in the Kelp" by David Abercrombie