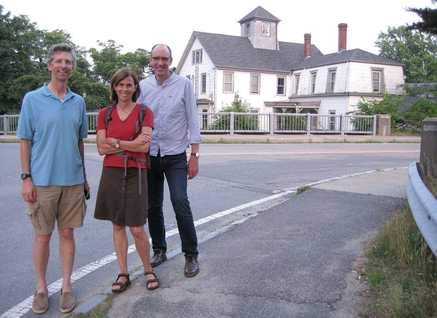 Brian Von Herzen (left) with scientists Jennifer Lippincott-Schwartz and Sean Munro on their way to a lecture at the Marine Biological Laboratory in Woods Hole. Mr. Von Herzen bought the house behind them at 3 Little Harbor Road last year.
Since buying the property last year, engineer Brian Von Herzen is realizing his vision to turn the cupola-topped house at 3 Little Harbor Road in Woods Hole into an “intentional community” for science students, researchers and faculty. Called “Climate House,” the idea is to mix researchers from different fields under one roof to stimulate novel thinking on how to avert catastrophic climate change.

“This is a key question of our generation: Do we have the courage necessary to take the steps to achieve sustainability and preserve biodiversity on our planet?” Dr. Von Herzen said. “Our civilization hangs in the balance—If we don’t get this right, we will be facing water wars and food riots.”

Dr. Von Herzen, 54, grew up in Woods Hole and graduated from Falmouth High School in three years. He then completed an undergraduate degree in physics at Princeton in three years with high honors, and holds a doctorate in planetary science and engineering from the California Institute of Technology. He is the CEO of Rapid Prototypes Inc. and also the founder of the Climate Foundation, a nonprofit dedicated to “carbon balance on land, sea, and air.”

Climate House is modeled after the “hacker house” culture of Silicon Valley, Dr. Von Herzen said. Hacker houses are houses with lots of bunk beds, wireless Internet, and laptops, where tech entrepreneurs take up residence to incubate ideas for new products and innovations.

Close quarters are essential, Dr. Von Herzen said. “The rate of innovation at hacker houses is not directly proportional to the number of engineers, but to the density of engineers,” he said. “They’re working and living and cooking and breathing together and there’s a lot of exchange of ideas.”

This summer Climate House is hosting a mix of scientists visiting for different summer conferences and courses. There is a large contingent from the geophysical fluid dynamics program at the Woods Hole Oceanographic Institution—this year’s theme is “climate physics and dynamics”—as well as lecturers in the summer courses at the Marine Biological Laboratory. “It’s been a mixture of climate and biology, which is great, because I think our climate solutions will be multidisciplinary,” Dr. Von Herzen said.

In an e-mail, Dr. Von Herzen wrote that, “Affordable accommodations are provided to accepted students, researchers, and faculty with a desire to contribute to the technical and creative process at the Climate House.” House manager Alexander G. Stevens said a bunk bed costs $300 per week. Weekly potlucks are organized to promote community and conversation.

On a clear, breezy evening in July, a dozen residents at Climate House sat down to a meal of lentils, cheese and salad before walking down to the MBL’s free Friday evening lecture. One of them, Jennifer Lippincott-Schwartz, a biologist with the National Institute of Health, has been staying at Climate House most of the summer.

As Dr. Lippincott-Schwartz headed down Water Street toward the lecture, she said staying at Climate House has been very enjoyable. “We’ve got these dinners where the climate scientists and biologists are having fun. And the conversations that emerge from it are really fascinating. I’ve learned about hurricanes and ocean currents.”

She particularly enjoyed a midnight run-in with a professor from the California Institute of Technology who studies the moons of Jupiter. He pulled out his laptop and showed her pictures of the different environments found on the planet’s moons. “It was beautiful—the ones that are ice, the ones that are dry,” she said. “It’s crazy to just have the opportunity to have that conversation, out of the blue, at midnight.”

Dr. Von Herzen listened closely to the lecture, which was about deforestation and agriculture’s effect on water quality in the central Amazon. That morning, Dr. Von Herzen said, he had heard a Cambridge professor describe new discoveries in the mechanics of intracellular transport; at mid-day he had attended a lecture on nitrogen cycling in the water column. “I think of Woods Hole in the summer as Ocean University,” Dr. Von Herzen said. Climate House gives students and scientists “an affordable way to participate in that great community,” he said.

Dr. Von Herzen splits his time between Woods Hole, where he lives with his partner on the third floor of Climate House, and their geothermal house in Carson Valley, Nevada. Climate House serves as the “headquarters” for the Climate Foundation’s work on carbon balance in the ocean, he said.

The Climate Foundation has several other projects underway. Last year, Dr. Von Herzen received a $3 million grant from the Gates Foundation to build a community-scale biochar reactor in Nairobi, Kenya. (Biochar involves burning organic waste, such as corn stalks, to both create electricity and produce a charcoal product that enhances soil fertility.)

The Gates grant also enabled the Climate Foundation to demonstrate a biochar reactor designed to char human solid waste at the “Reinvent the Toilet Fair” in Delhi, India, this past March. “It was a major fair attended by dignitaries from around the word,” Dr. Von Herzen said.

Dr. Von Herzen’s for-profit company, Rapid Prototypes, Inc., is working with New England electric companies on how to store renewable energy in the power grid, allowing solar power to be used at night, for example, he said.

Dr. Von Herzen said the Climate Foundation purchased Climate House from the Woods Hole Oceanographic Institution in June 2013 for just over $800,000. WHOI had used the building for student housing and office space before putting it up for sale several years ago.

According to Susan F. Witzell, the archivist at the Woods Hole Historical Museum, the house at 3 Little Harbor Road was built in the 1890s by the conductor of the Old Colony Railroad’s Dude Train, and served as both a residence and a store. It was then run as a boarding house before being turned into four apartments. Ms. Witzell said she lived in the ground-floor apartment in the early 1970s when she first moved to Woods Hole from New York City. The house was then sold to the Penikese Island School, and then to WHOI.

The exterior of the building is covered in asbestos shingles. Dr. Von Herzen said he does not plan to remove the shingles. As with silver tooth fillings, in which there is “less exposure to mercury, if you let them be than take them out,” he said he plans to leave the “very durable” asbestos shingles where they are. He said he plans to “preserve the historic aspects of the house” while upgrading the building to be more energy-efficient by installing systems such as a micro combined heat and power system.
​
Dr. Von Herzen is the son of the Richard P. Von Herzen of Gansett Road, Woods Hole, and the late Janice E. Von Herzen. Ms. Von Herzen taught music in the Falmouth Public Schools for 46 years.