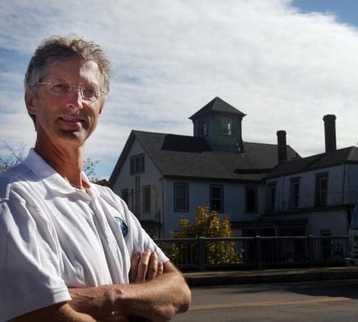 Brian Von Herzen, executive director of Climate Foundation, outside Little Harbor House, the headquarters for the foundation. The think tank in Woods Hole brings together multidisciplinary teams of scientists from all over the world to solve the world's climate problems. Steve Haines/ Cape Cod Times.
A two-story house in the heart of Woods Hole may be the crucible for solving some of the world’s looming climate quandaries.

The house on Little Harbor Road is owned by the Climate Foundation, a nonprofit “think-and-do tank” that brings together scientists from multiple disciplines to brainstorm and devise ways to combat climate change. Each summer about 20 scientists come to the house, often while on sabbatical from their home institution, to work with one another and access the wealth of scientific resources in the village.

“This house is a community of scholars,” said Brian von Herzen, the organization's founder and executive director. “We enable applied scientists and engineers to come to Woods Hole to learn enough about marine oceanography to help us in our effort to solve these problems and make it work.”

But the house is not a place just for theory. Von Herzen said the Climate Foundation works with its visiting scientists to create industries by developing practical solutions. One such project involves an attempt to reverse the bleaching of coral reefs, which occurs when warmer water increases biochemical activity and causes the photosynthetic organisms in coral to overproduce.

Cooling the water by just 1 degree can reverse the bleaching, and the Climate Foundation is testing it in Hawaii by taking the outfall from Honolulu’s seawater air-conditioning system and running it through pipes back to square kilometers of coral reefs.
“If we can put several of these infrastructures in place, we can keep a few living sections of coral reef with enough population density and size to enable the corals to propagate,” he said. “The coral reef ecosystem is on the brink of demise. We have to keep it alive while we balance our carbon budget.”

The Climate Foundation also is pursuing projects to turn biological material into biochar, a charcoal-based soil additive that can be used as fertilizer, and to create marine permaculture systems to essentially create floating farms that can reinvigorate “dead zones” where oxygen depletion greatly curtails marine life.

It may seem far-fetched, but Von Herzen said it’s all doable — with enough time, money and political will to create real change.
“The future is here today. It’s just not broadly distributed yet,” he said.
​
— Follow Sean F. Driscoll on Twitter: @SeanFDriscoll.