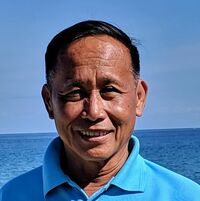 Geronimo Apas,  (Philippines) has spent many years working with seaweeds around the world, managing the establishment of  seaweed farms, the production of seaweed based extracts,  seaweed-based foliar and managed the quality and assurance functions of carrageenan. He also managed the production of Philippine Natural Grade carrageenan and Refined Carrageenan. His specialties include pulping chemicals, agrichemical,  PNG and refined carrageenan manufacture. In addition, Geronimo is also great at seaweed raw material cultivation, laboratory operations and Carrageenan plant design and construction.


Electrolytic and Recausticizing Plant -Supervised production of NaOH, Chlorine, NaOCl and HCl for wood chips pulping from 1984 to 1985 at PICOP.

2. Oleochemical- Supervised the continuous and efficient operation of Ester and MRP producing methyl ester, glycerin, mono alkyl phosphate(MAP) and coconut alcohol flakes from 1986 to 1989 at Pilipinas Kao Incorporated. Produced 99% alcohol fractions from coconut oil (C16 and C18) by distillation for sale as is and as raw material for the production of MAP-20.

3a. Agrichemicals- Managed the production of seaweed-based foliar fertilizer, mango flusher, mango flower inducer and seaweed-based feed ingredient from 1989 to 1991 at MCPI and Datingbayan (DBAIC)group of companies.

3b.Carrageenan- Managed the production of seaweed extracts termed PNG used as stabilizer, thickener, extender, suspender and texturizer for food preparations from 1991 to 1993 at MCPI and DBAIC.

3c.Laboratory operations- Managed the quality and assurance functions of carrageenan and its blends for food and pet food applications.Moreover, research and development and product application studies were extensively done to increase carrageenan market penetration from 1993 to 1995 at MCPI and DBAIC.

4. Seaweed farming- managed the establishment of seaweed farms (Cottonii and Spinosum) in Tanzania as raw materials for the production of carrageenan in the US, and Europe from 1995 to 1997 at C-Weed Corporation in Tanzania

5. Carrageenan Plant Construction- Managed the construction of carrageenan plant in Surabaya, Indonesia and handled the training of its laboratory staff and production workers from 1997 to 1999 at PT Amarta Carrageenan Indonesia